The idea of creating sixty-five activities or events came as I looked at a selfie picture on my phone, just before a walk over a bridge.

My husband Ross and I were camping at Whistler Mountain this summer with our son and his wife and one days’ adventure was to go on the gondolas and chair lifts then cross the recently finished suspension bridge called the Cloudraker Skybridge. 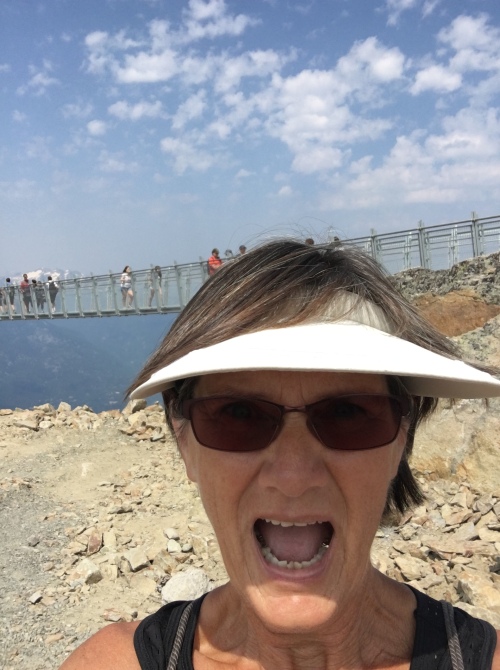 …just before taking the first steps onto the bridge.

As I’m not a lover of heights I was a bit nervous but determined to show a brave face and enjoy the trek.

Not quite a quarter of the way over I heard a lady say, “I think that’s far enough” and she turned back. I agreed, said, “I think so too” and was about to follow her when I realized others were also hanging onto the rail. Perhaps they weren’t gripping with all ten fingers like me and moaning quite as loud, but we were making progress as we inched along.

With my son appearing behind me and talking close to my ear, each step was an encouragement to succeed, being told I was doing well and that I indeed could do this. I wasn’t sure I believed him, but I kept walking and trying not to see through spaces in the slotted steel plank to the earth far below. I was simply trusting the massive structure to hold me and listened to the sound of my son’s voice.

Arriving to the safe side, a platform with a solid base…well, a solid wood floor with waist high railings, perched atop a leveled surface on the top of a mountain. I was able to take a deep breath and enjoy the view of the beautiful valley all around me.

I was verbally thankful that the next stage of development was not finished yet – a glass bottomed view point which will be just another several steps beyond the safe platform.

That is not on my bucket list of things to do or conquer.

My next concern was that eventually I would need to go back over the suspension bridge as there was no other option.

I overheard a girl about 10 years old telling the adult near by that in no way was she going back over that bridge again. I wanted to encourage the adult to call for a helicopter to come get the girl and that I’d offer to go along for the ride but knew the possibility wasn’t likely to happen.

And so, we set out…I hovered my left foot over the solid platform while I grabbed at the cold steel railing with my two hands again and waited, waited while my body and brain were synced up and then allowed my foot to drop down onto the walkway.

We walked forward and left the girl behind – not knowing how her people would get her moving.

On the firm ground of safety, I was euphoric.  I can’t say I enjoyed the journey but I can say I did the walk successfully and am proud of myself.

Reflecting on the photo and the trek across suspension bridge I’ve come up with the plan of exploring sixty-five new adventures over the next year to celebrate a birthday of the same number.

I’ve done the math and have included the suspension bridge as my first event. There will be sixty-four more at this time next year. It seems to work out to roughly one new item to explore, touch, feel, go to, do or experience per week. I may have to expand them or bunch them up but the goal is to manage sixty-five new things in the next year.

Come back and see what this official senior citizen is doing.

The latest news on WordPress.com and the WordPress community.

Because we’re all recovering from something.

Glimpses of Glory as seen through a dark glass

WordPress.com is the best place for your personal blog or business site.

Not the kind of texting that comes to mind