With my suspicions (drug induced?) that some bacteria, perhaps from my treks to the emergency ward and my overnight sleep in ICU had mysteriously found its way into my blood stream I spent my days at home.  Over the next weeks I managed to become well enough to gather blankets and pillows and sit in my glider chair and watch the goings on in my back yard.

Observing a garden come to life may not be exciting for some people but for me it is like having more and more friends popping over just to say hello.  I hung out on my deck so long  I watched the stalks grow taller and my ‘friends’ bloomed with vibrant colors of purple, white, yellow.   Just for added fun, my Hosta leaves unfurled, opening like fans over all to bring shade roofs for tender shoots.

As I’ve mentioned in a previous writing, I didn’t have much to do but look about, pray, think and write in my journal.

I also began a new project of creating a Gratitude Journal because it was the right time to dig as deeply inside of myself to see what I could be thankful for.

May 20/16 – thankful my cat hovers close by – he’s never seen me hanging over a toilet before making noises.  He sits and watches me.  Comforting.

May 23/16 – thankful for my oasis of a deck, a rippling water fountain, sounds of cars in the distance, bird’s vocal vibrations, planes overhead and tree branches gently bobbing up and down which soothe my questions, fears, concerns – quiets my mind.

One Sunday morning in early June as I was nestled in my blanket cocoon a bible verse appeared on my phone from the radio station Praise 106.5.

From the new testament in Romans 12:12 I was instructed: Be joyful in hope, patient in affliction, faithful in prayer and I wrote, nice to try and keep in mind.

Outside my fence, in the common area of my complex, Mom and Dad crow became my favorite entertainment day after day while they squawked and brought scraps of whatever it is that crows feed their babies.  The little family were in a condemned tree and I like to think I saved their lives.

After a big wind and a large branch blew down the tree was deemed unsafe.  On tree death day, the hackers came to cut it down. I purposely took a stroll and casually mentioned to a hacker that a bird’s nest was way at the top which I had observed from my back yard.  That halted the rest of the tree coming down until late summer and when the birds would be gone.

Thus, for the next few weeks it became a daily ritual to visit with my bird pals.

In the morning, I’d make a cup of herbal tea though I preferred coffee and Thomas the Cat and I would head outdoors to hang out until my medication wore off or we were bored.

Later in the month, after one full glorious week of feeling good and health was returning, my throat again became raw, my voice disappeared and the painful pressure returned to my face. The wretched cough increased along with my despair. Within the week, it was necessary to begin a new round of antibiotics.

My regular journal entry at the beginning of July states, I cried yesterday.  I cried today.  My goal is to get through this day.

I read in my bible, Proverbs 19:16-29:  Many are the plans in a ‘wo’/man’s heart but it is the Lords purpose that prevails.  The journal answers back…What is your purpose in my life – I sure don’t get it.

A couple more weeks passed and I became well enough to go beyond my deck, take short walks, drive my car and venture off to various public locations where I tried to avoid any potential germs from stalking me.

I was returning to my healthy normal…or so I thought.

This year is about CHANGE – my word for the year.  Indeed.

I’ve been accepting, adapting, aggravated and rebelling against it for nearly six months.  It is the point isn’t it?  Change…

Recovering from my car accident last November is a much longer process than anticipated and had no idea that I’d still be talking and writing about it seven months later.  However, here I am…the weekly routine of massage, physio, exercises, stretches, fitness classes and of course getting back to my beloved game of Pickleball.

The frustrating part of course is my pain level and how that gets tiring for the mind, and then there is my annoyance at my body for not getting over this quicker.  A high expectation of myself I suppose.

It’s all good for me, the routines and strengthening my body, but the actual scheduling and going to the array of appointments is frustrating at times.

What is happening on the inside is good too.  A needed diet change.  The recognition of what a procrastinator I can be regarding my writing and painting schedule and how to fix that.  The simple plan of scheduling into my day-timer like I do everything else is necessary.  Why not before now has much to do with putting it off and allowing other invasions of my time to take over.  Physio, massage, TV, husband, life, body tired, brain creativity zapped, fun elsewhere…

I’ve been standing on the sidelines watching this retired lady spin her wheels.  Make excuses.  Put self down and tell self what is the point anyway.  Well, self, move over – I know all about you, you big ole critic you.

Truth is, I’ve been having some writing fun posting a series of short entries on the word RETIREMENT and what it means to me, on my Facebook author page.

I’m also looking forward to a pubic reading with my writers group in July.

I painted a small picture in an evening with a group of ladies and it’s motivated me to get that 24 by 24 inch one started for my daughter.  I bought the canvas – that is one step.

And the sunshine, oh the sunshine!  My garden is busting out in blossom and if you can believe me, there is nothing better than sitting around – lounging –  in the midst of multitudes of colors – flowers everywhere, sipping a cup of morning coffee.

It is the best place for day-dreaming.

Even Thomas the cat loves it. 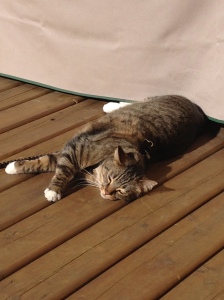 How about you?  Did an unexpected life change force you to re-evaluate how you do daily life?  What are the highs and lows you are dealing with? 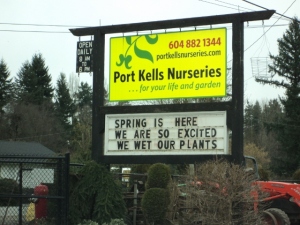 Once spring has arrived one of my most favorite places to visit is Port Kells Nurseries.  On this years first visit,  I noticed their sign and well, it tells it like it is.  I can relate to the message of excitement, spotting new items poke their way out of the dirt, new life, vibrant colors, the smell of first grasses sprouting, grime under the fingernails, scheming ways to make room for more plants…ahh, there is nothing like it.

It seems a strange thing to daily check on the growth of a new bud or marvel at the development of its shape or dance with glee at a surprise baby shoot which has blown in from the wind, but is it really?

It reminds me of birthing a child and then participating in the blossoming of personality and ‘color’ as the child grows. 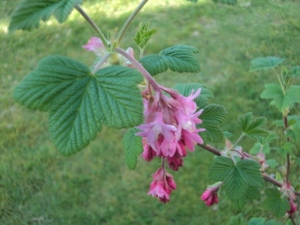 This then takes me further, and I imagine new birth as God sets forth his seed, creation, life and his children, his garden. Has he stood back and marveled, observed and checked daily to see what progress had been made, is being made? 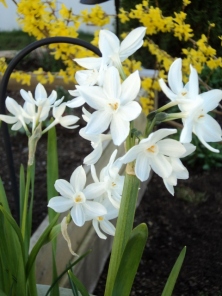 The latest news on WordPress.com and the WordPress community.

Glimpses of Glory as seen through a dark glass

WordPress.com is the best place for your personal blog or business site.

Not the kind of texting that comes to mind